The Gourmet Cupcake – Cornerstone of Sanity

I’m sitting here in Cupcake Royale tonight. I really shouldn’t be indulging in three-dollar cupcakes. For one thing – no steady income. For another thing, shocking lack of exercise the past couple of weeks.

And yet, here I am. I do have my reasons, though.

1) The thought of spending the evening at home alone watching TV just seemed utterly revolting tonight. Usually it doesn’t bother me too much. Usually I am reading a good book or blog rather than watching TV, but lately, I’ve fallen. It is Glee night, which on most Tuesdays I am very excited about, but tonight it just seemed…empty.

2) I really needed to get out of my routine. Usually I would put on my tennis shoes and go find a new run or something, but tonight I was just too tired. And I have never been to Cupcake Royale before. And, being such a HUGE fan of Trophy Cupcakes (the other Seattle-based vendor of gourmet cupcakes) I thought it would be a good opportunity to do a little comparing…just for future reference.

If I’m going to spend three bucks on a cupcake, I’d better make sure it’s the best dang cupcake in town, don’t you think?

3) It has been a difficult month in a number of ways. I have been around and around and up and down all these rabbit trails of potential employment/life paths. It seems nearly every day a new possibility presents itself, and I am immediately off and running, trying to imagine my life down that path, and trying to figure out how it will work logistically, and then usually coming to the conclusion that it is really not the path I feel called to follow. Except for the few times I have felt that it WAS the right path…only to have the doors slam shut in my face – HA! And I am just exhausted.

And we all know cupcakes have miraculous rejuvenating powers…especially the three-dollar ones.

I could come up with further justification, but I think you’ve probably already forgiven me this indulgence. I’ve almost forgiven myself, so we’ll call it good.

By the way, Trophy “takes the cake” hands down. Royale is not bad, but I am becoming more and more certain that no cupcake will ever be able to match the pinnacle of buttery, cakey, melt-in-your-mouth, frosted goodness of Trophy’s classic Vanilla Chocolate. My eyes watered a little bit the first time I tried one. For real. And I don’t even really like cake. 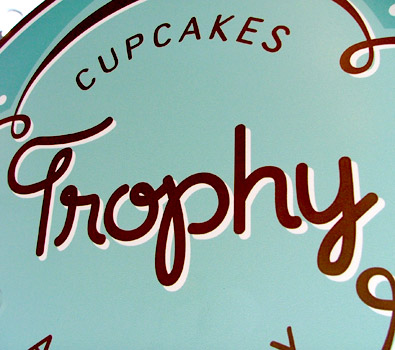 Anyway, there is a lot I don’t understand about life right now. There is a lot that I am anxious and uncertain about. There are a lot of things I can’t control, and even more that I can but sometimes wish I couldn’t.

One thing I DO know, though, is that Monday through Friday, 8am-8pm, and Saturday and Sunday, 8:30am-8:00pm, the best cupcake in Seattle (and perhaps the WORLD) can be had at Trophy Cupcake in Wallingford Center for a mere three dollars.

Of this one thing, at least, I am certain.

So here’s to Trophy, for adding something delicious, and beautiful, and dependable to the world.

Lord help me if they ever go out of business.